Today we did a little bit of this ... 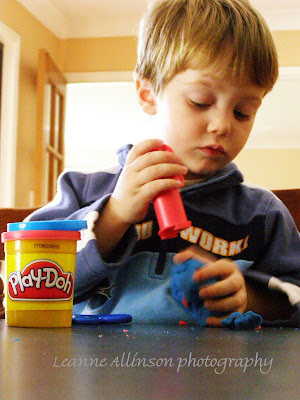 ...and had fun squishing our fingers in the cool, blue, play-doh mess =) !

Posted by Leanne at 4:08 PM No comments:

It's ballet day today. Ballet and Jazz...She is loving it and is now thrilled to pieces that she will be performing in two recitals at the end of the year. (photo: Tahlia is the one in the centre with the headband). 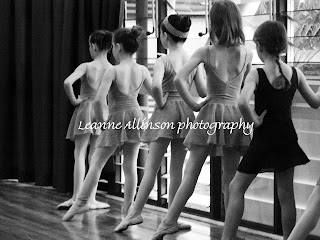 Perhaps on Friday, Liam will start hockey. But how far do I trust him with a stick (or CLUB as he calls it!) out on a field with a group of kids?
Posted by Leanne at 10:04 AM No comments:

He would do you proud Dad. Without fail he is out there (dragging me along) to water our new plants...which are struggling to survive in Level 6 water restrictions. For those of you NOT in SE Qld, I'm not even sure there is a higher level to go to. We are on 4 minute showers. Hoses are banned. Cannot was cars in your own yard. Forget watering your garden. And are limited to a daily amount of water rations per person in each household. *yikes!* It sure has made living FUN!? Yet it does not stop a two year old growing plants. Lucky for him we have a rain water tank and he is especially restricted to one bucket per day. 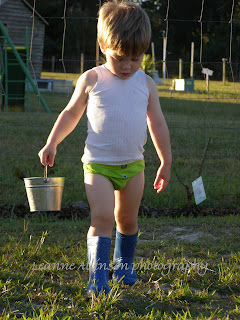 I'm not sure which he enjoys the most - playing in the water, watching me do all the hard work by carrying the bucket load of water or turning the tap on! By the way, that's not the bucket size he is limited to, shown in the photo. 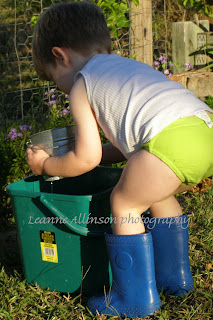 And usually, that green bucket isn't the one either. Hopefully it will rain at some point and I might get the chance to introduce him to the hose. He has never even seen it out and about at our house. It has been locked away in the shed. Out of temptation's way...hehehe! Won't he enjoy that option then! 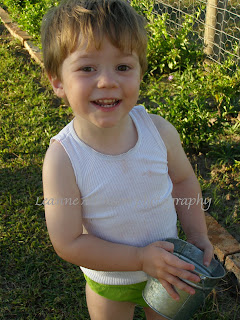 Posted by Leanne at 8:24 PM No comments: 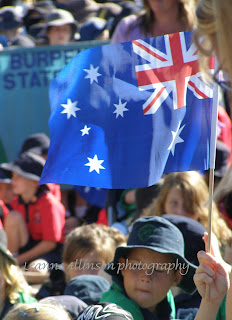 Today we marched down our main street. We marched for the Anzacs. To show pride in where we are today and what these brave men and women did for us in the past. The schools marched. And I marched along side of them, taking photos and remembering my Grandfather who fought in WWII. 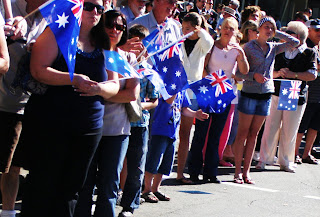 I wanted the kids to understand the significance and importance of this day. That it's not just about flag waving and wearing red flowers. I'm sure they don't comprehend it, but hopefully by participating, one day they will. Until then, I want them to be proud that they took part in the parade and be willing to do it again next year. 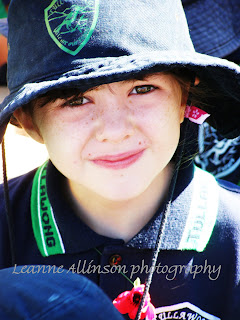 Ok, I think I have fixed this thing now. If you are reading this blog, can you please leave a comment. I know I have asked this before, but I think I have fixed it now. I just want to find out who is reading about our little part of the world or if I am doing this all in vain *yikes*!
Hope you can accommodate. Thanks.
Posted by Leanne at 5:46 PM 2 comments:

It's a sad case but a normal scenario, that schools must fund raise. This year, once again our school has a chocolate drive. We hope to buy sporting equipment and those extra books for our poorly resourced library. Thankfully heaps of people love chocolate...and for one dollar a piece, are you going to resist? 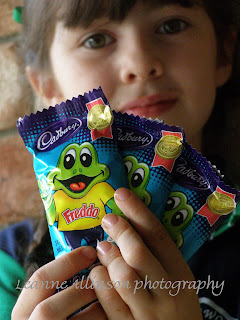 So be warned grandparents, uncles and aunts. We may be headed your way. But seriously, would you buy chocolate from these two?? 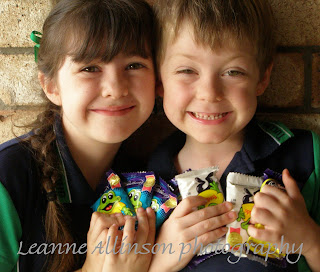 Help them out anyway, please!!

Posted by Leanne at 4:08 PM No comments:

Yay!! It's back to school. After ten short days of holiday madness, it's good to get back into some kind of routine. The kids were looking forward to starting back as well. We weren't sure how Liam would go, (with the novelty maybe wearing off and a recent break away from the playground) but he went back full of enthusiasm and wonder. Again ... yay!!! 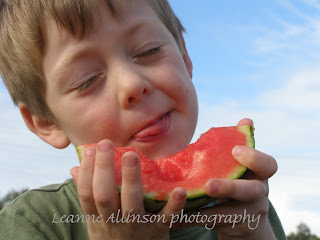 Tahlia has been busy planning her eighth birthday. Can you believe that! *sigh* We made special birthday invites for five of her friends to join her for a sleepover. Her birthday falls on the same weekend as the Urban Country Music Festival, and since that will be happening just down the road, she also gets to enjoy the fireworks that will conveniently be seen from our front yard. We spare no expense ... hehehe! 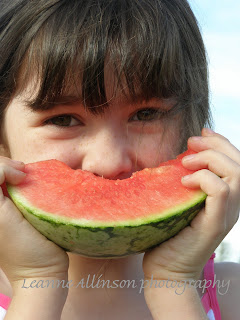 And of course our youngest has been up to his usual Monkey Business. But this time he has a friend. Please meet Boots (aptly named after the monkey from Dora the Explorer). 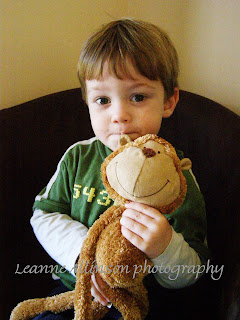 Thanks Lorraine and Rick. He is really enjoying his new friend. 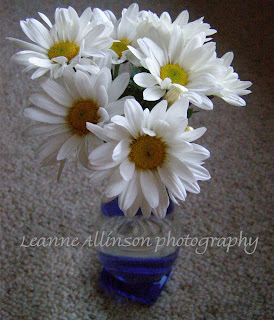 Don't you just LOVE it!
I have these flowers sitting on my kitchen window ledge at the moment. They are cut from the very same plant that Tahlia and Liam gave me for Mother's Day five years ago! They have survived a house and garden relocation and severe drought. I am so pleased to have them in the house again this year. Wonderfully enough, they like to flower at both Tahlia and Liam's birthdays (May & November). Can't get better than that.

I really do LOVE it!

Posted by Leanne at 6:17 PM No comments:

Hi guys, can you do me a favour. Please leave a comment to help me know who is reading this blog. It would be very much appreciated and will make me think I am not just rambling on about stuff to no-one in particular...
Thanks.
Here are few more photos from the Gold Coast. 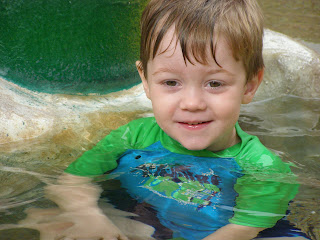 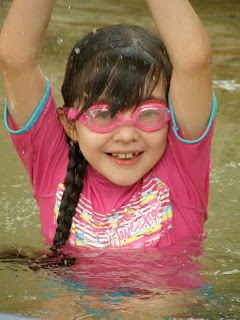 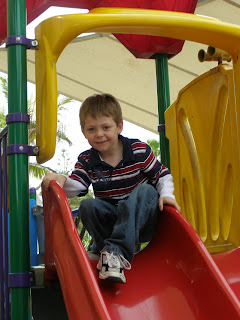 This one is for Grandma... (since we know you don't mind eating these chunky steak pies!)
While on our seemingly endless quest to pass six hours away at the shopping centre, (Mark didn't finish his conference until late,) we came across Goldstein Pies. Somewhere in the back of my mind, was the thought that these were the very same pies the Grandma absolutely LOVES!! And since I didn't feel like fighting the food court rush at lunch time with three kids in tow, it was decided we might give them a go. Let's just say the kids thoroughly enjoyed the food placed in front of them. And I might have enjoyed it too, given the chance I was actually allowed to try my own pie! So here are some photos. Hope you enjoy!! 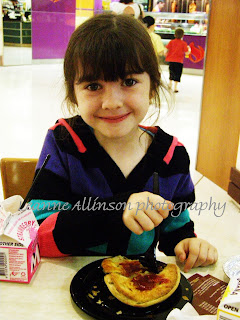 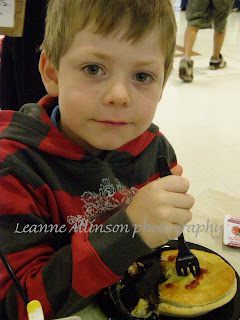 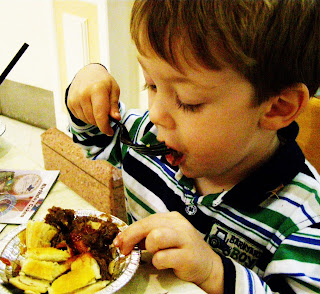 Okay, for the short amount of time we were there, it rained. Sure we knew what the forecast was before we left, but what do those meteorologists know. (They don't even have windows in their buildings.) So, here we were going to the GOLD COAST for nice sunny weather, accompanied by a low weather system that was happy to sit right over the coast. *sigh* Not much we could do about it. Mark was at a conference for work, and the kids and I had the apartment to ourselves. I wanted to put my feet up and just relax. It was my little break away from home too...right? Not what the kids thought. It was time to go swimming every five minutes or so... The rain didn't bother them. They were planning to get wet. I on the other hand wasn't planning it. Three to one. I lost out. Here are some fun photos anyway... 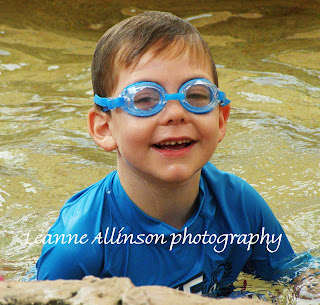 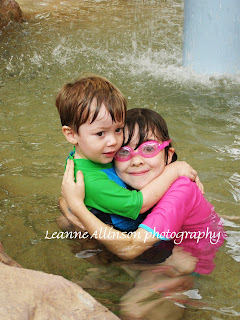 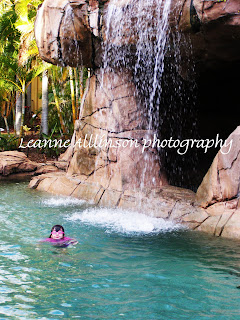 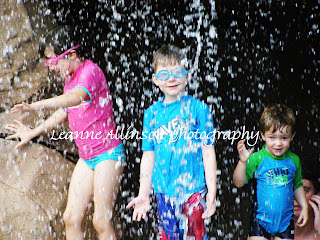 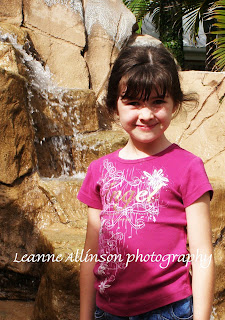 Have a great day!

Crazy Hair Day and all that stuff ...

What a way to raise money for sports equipment! The kids are really into it though. Initially I thought the crazy hair day concept was to raise money for Cancer research. After all it does coincide with the "Shave for a Cure" day... but apparently the school needs sporting gear. Well, why not. 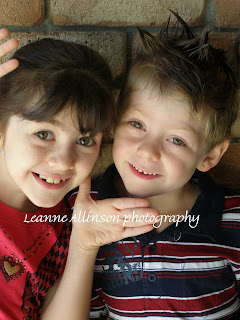 At least these guys will have the opportunity to use it in the coming years. Liam was all for the having of "CRAZY" hair, but let's face it... he doesn't have a lot of hair there to work with. However, I have never seen him preening this much before, especially with his hair. (He doesn't even brush it before going to school normally!!!) He was so eager to have "points all over his head" (some Batman thing?!), that he has sat here all morning, playing with his hair. I don't know what he is going to do when he has FIRST session at school, outside, and has to wear a hat! Haha. My guess is that at first opportunity he will go to the bathroom use some water and then spike it all up again.
Tahlia on the other hand was too dignified to have crazy hair. She choose to just be in plain dress rather than her school uniform. What can I say. She's a DIVA! *with attitude*. 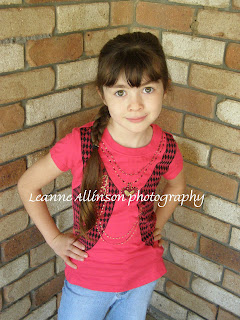 Hope they have a fun day! (and raise heaps of money).

Posted by Leanne at 9:36 AM No comments: 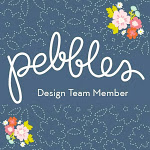